The Best Vegan Restaurant in Philadelphia 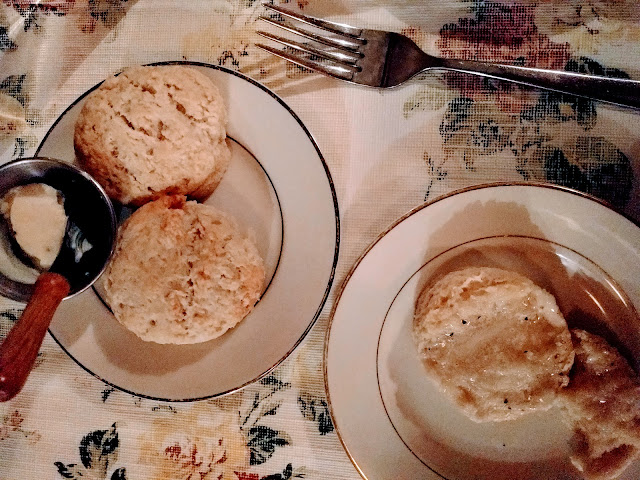 I don't actually write restaurant reviews all that often, but in this case, I would be remiss if I didn't share the goods on this one -- because really, I want you to go try it. And bring all your friends. A week ago, my husband and I were celebrating our second wedding anniversary and signed ourselves up for one of the single-seating dinners at South Philly's all-vegan Miss Rachel's Pantry. In fact, I had been looking forward to checking this place out for quite some time, ever since I read about it in the vegan issue of Grid Magazine, but I have to admit: this experience blew my already exceedingly high expectations out of the water.

They know how to work your anticipation too -- dinner spots here are reserved and paid for in advance, much as you would buy tickets to your favorite show, so you don't even need to worry about asking for the check. All diners are seated at once, and courses come out one by one for everyone to enjoy together. I counted seating for 22, mostly at a large communal table, but a few two-tops round out the room for some date-night intimacy. Oh -- did I mention? It's also BYOB. We were drinking some lovely vinho verde we had discovered originally in a tiny restaurant in Lisbon on our honeymoon, but a nice bottle of red would do the trick.

On this particular Wednesday in October, I arrived only a few minutes late and locked up my bike in the rack out front, situated right below a larger-than-life relief sculpture of a rather jacked Grecian-looking gentleman. Sweaty and rather dehydrated from the half hour ride to South Philly, the first thing I saw when I walked in was the plate of biscuits with butter waiting on the table, and I immediately thought wait! Those aren't vegan! ...BUT THEY ARE. Even the homemade compound butter -- made of clarified coconut oil -- was 100% dairy free. How many times have I sat down at a restaurant table and stared longingly at the house-churned butter while asking the waitress if she could please bring over some olive oil for dipping? We were off to an excellent start. 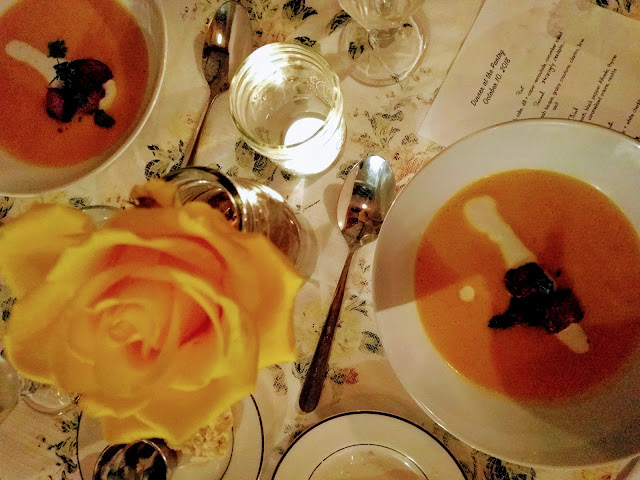 As it turned out, everything that came out of that magical kitchen was entirely plant-based vegan wizardry, and believe me when I say that Miss Rachel has figured out how to transform literally every single food you've ever craved into a beautiful, guilt-free, animal-lovin' masterpiece. It's not even that it's "good for something vegan," it's that everything she served actually tasted better than the non-vegan original. Best biscuits I've ever had? Check. Best homemade pasta in alfredo sauce with butternut squash? Check. Best chocolate mousse cake? Hands down. A seitan ragout that tasted so meaty it had me suspiciously examining my forkful? We're talking five courses of some of the most incredible food you'll ever happen to find on your plate, all of it just so happening to be vegan.  Even the hearts of palm "crab cake" would have easily passed for the real thing. 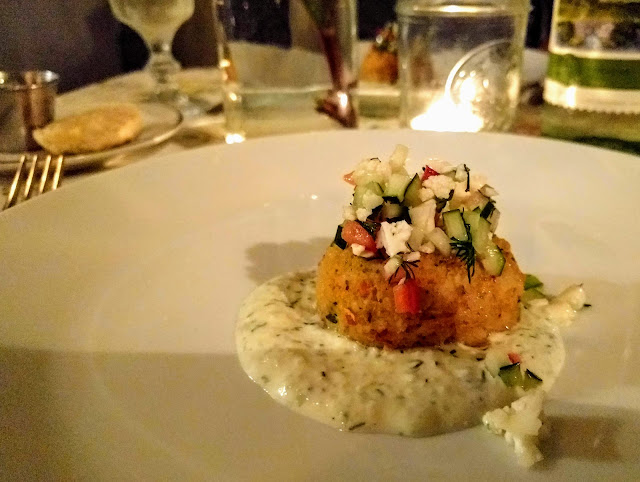 This is the kind of place I want to bring my parents to. My brother. My skeptical friends. For all of my meat-loving, dairy-guzzling, how-on-earth-do-you-get-your-protein friends, family, and loved ones -- this is the kind of place where I want to buy them dinner and sit them down and let them butter up those biscuits and say see!!! There is a whole other incredible world of plant-based food out there, and it is totally possible to eat the very best, most delicious food money can buy without killing or exploiting a single animal, without filling your veins and burdening your heart with the poison of saturated animal fat and cholesterol, without destroying our waterways with runoff and our atmosphere with methane and marginalized communities of color with toxic animal waste produced in the industrialized factory farming operations all across America.

Well, I probably wouldn't say all that. I would just let them enjoy their food, and enjoy it with them as we share another wonderful dinner together. That's the hard part, really -- knowing the web of impacts of all of our food choices and keeping that knowledge in check in the presence of family and friends. Food choices are right up there with religion and politics -- intensely personal, fundamentally intertwined with self, and sure to cause offense or even a fight should someone so much as suggest that your stance might not be the best one. It's hard to talk about being vegan with family especially, because these are the same folks that raised you and fed you for years on all manner of now-unwanted meats, eggs, dairy, and the like. To intentionally turn down their food for anything less than a morbidly severe food allergy is essentially casting judgement on their choices, on their ethics and values, on them.

Food is intensely cultural, and many of our familial rituals are centered on meal times. I grew up eating eggs, pancakes, and liver mush on weekend mornings; french toast and bacon on Christmas; turkey and ham at Thanksgiving; grilled homemade burgers on the Fourth of July. My Mom always made us lemon pound cake on our birthday, using the recipe that her mother and grandmother had made before her, chock full of milk, eggs, and butter. My husband has powerful memories of the cheese ball his grandmother would make for the holiday gathering, along with the Moravian sugar cake they would all share on Christmas morning. Though our most nostalgic food memories are far from vegan, they reflect a cultural approach to cooking and eating that permeates our families in both past and present, one that is extraordinarily difficult to change. Not only is it intensely difficult for us to pass up these nostalgia-rich foods at homecomings, but when we do, it smacks as a personal affront to our well-meaning loved ones who made them for us. "But I made this cake for you! You love pound cake!" Why yes Mom, I do love your pound cake. I did love your pound cake. I have now realized that I don't really want to eat your pound cake. Dare I suggest that we figure out together how to remake the recipe to use vegan butter, a flax egg, and almond milk?

The thing is, most foods that have originally been made with common non-vegan foods such as butter, milk, cream, and eggs can easily be revised to use plant-based functional substitutes. When these recipes originated, eggs and dairy were easy to come by, relatively cheap, and most likely used in moderation. With the rise in factory farming and government-subsidized low prices however, what once were ingredients out of necessity have become ubiquitous characters on nearly every ingredient list you may find in restaurants, at the grocery store, and at home in your mother's pound cake.

Today though, we now have access to easy, inexpensive, and far healthier substitutes such as flax seed, almond/soy/oat milk, coconut milk, coconut oil, and the like. Tofu, tempeh, and lentils make delicious meat alternatives in all manner of dishes, and wheat-based seitan can be seasoned so realistically as to be almost indistinguishable from the meat it is intended to replace.  All it takes to rewrite the old recipes is some creativity, an open mind, and a willingness for culinary adventure.

If the five mind-blowing courses at Miss Rachel's Pantry are any indication, we have substantial proof positive that it is entirely possible to recreate just about any food imaginable from the old meat and dairy camp into a tastier, healthier, and more creative version from plants-only ingredients. Going vegan does not have to be about giving up, restriction, or lack -- its just a new era of cooking and eating limited only by the reaches of your imagination and your willingness to try.

When not chasing her plant-based food obsession all over Philadelphia, the US, and beyond, Heather Medlin Harrill is busy running her architecture and community planning firm, Ginkgo Vernacular, a "plant-based" practice specializing in the design and development of healthy, equitable, and ecological neighborhoods. 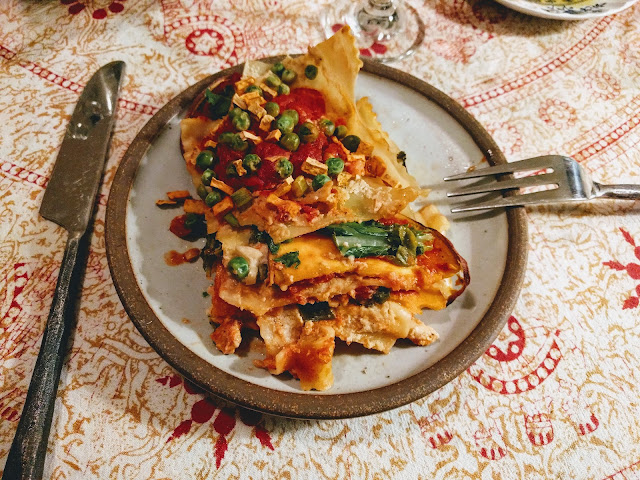 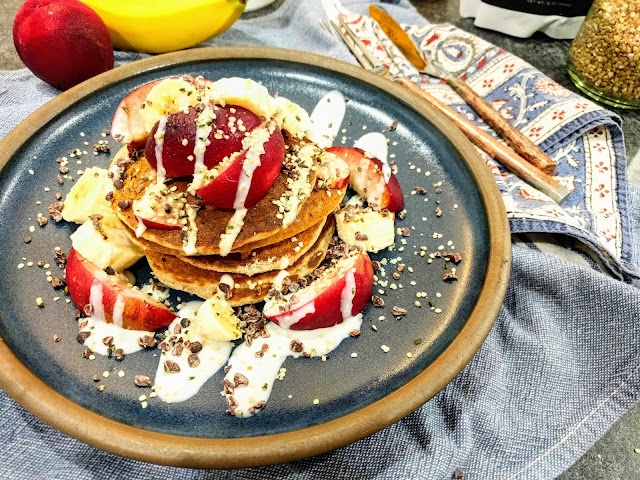